It has been a long winter of storms, rain and wind when conditions have been far from ideal for walking the coast path. Eventually a high pressure settled over the country, the sun came out and the earth began to dry. We leaped at the chance to blow the dust off our walking boots and head out into the open air.

We left off at Port Isaac, having walked from Rock. Ahead of us was the last stretch to the Cornish border, known to be wildest, loneliest and steepest section of the path.

It was a bright day. There had been a frost on the ground as we left home but it soon cleared and by the time we reached the north coast the sun was shining strongly with little breeze. It did not take us long to remove our fleeces.

Passing through Port Gaverne, we headed up to the cliff tops admiring the blue-green sea unsure what to expect as the books warned us that the section was to be ‘severe’, their most extreme category.

It was good to be back in the open and we were soon greeted by a little stonechat, as tame as a garden robin and about as perky, checking what we were doing approaching his tangled web of bare blackthorn and gorse.

There were some steep ascents and descents but we decided that the we had chosen the best direction for the descents were definitely the steeper. A couple of the ascents did not have steps but were more scrambles on slatey shale, requiring a good grip. Our device recorded about five valleys with some being little problem.

Bare, lonely valleys stretched inland, devoid of houses or animals. Along the relatively smooth shelf of Tregardock cliff we were reminded of the cliffs near Zennor. Inland of us lay acres of green fields with scattered farmsteads whose sites must have been in use for generations. These were backed by a gently rising escarpment.

After a long level stretch, we climbed out of Backways cove and found ourselves at the top of a flight of steps down into the interestingly-named Trebarwith Strand. There had been no beaches worthy of the name since we had started, certainly no sand. Despite its name, Trebarwith had no beach either, consisting of a rocky ledge with an attractive stream running between smooth slate walls.

This was the beginning of the slate-mining area and the final stretch into Tintagel was peppered with quarries, tips and the evidence of former extraction activities.

In no time we were passing Tintagel church, perched on its wind-swept hilltop, and descending to the bulk of the headland, surely the best defended headland site of a promintory fort on this coast with its narrow neck of land connecting  the island to the mainland.

It was too early in the season for the island to be open and so we surveyed the castle ruins on the mainland, completely missing the ‘controversial’ sculpture of Merlin on the cliff face which featured on the local news later that evening, and headed onwards.

The site of the Camelot Hotel was another reminder of the way in which Tintagel has been developed for and by tourism over the years. The village of Tintagel is replete with references to the Arthurian legends, matched only by Rochester, with its Dickensian connections. ‘Arthur’s Garage’ vies with ‘Miss Havisham’s Bridal Gowns’.

Feeling fit, we walked onwards towards Bossiney Haven where we ended the day’s walk. We had covered 9.8 miles according to the map, in 4.5 hours. The height gain had been 1651 hard-earned ft.

We spent the night in Boscastle where we walked around the village which was so devastated, and made famous, by the flood in 2004. All seems to have returned to normal except all our electronic devices which seemed to have wills of their own, perhaps thanks to the presence of the Museum of Witchcraft and Magic.

When in slate country … 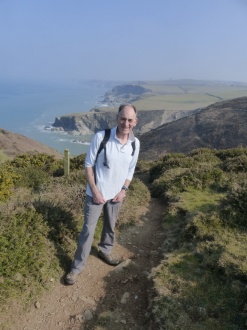