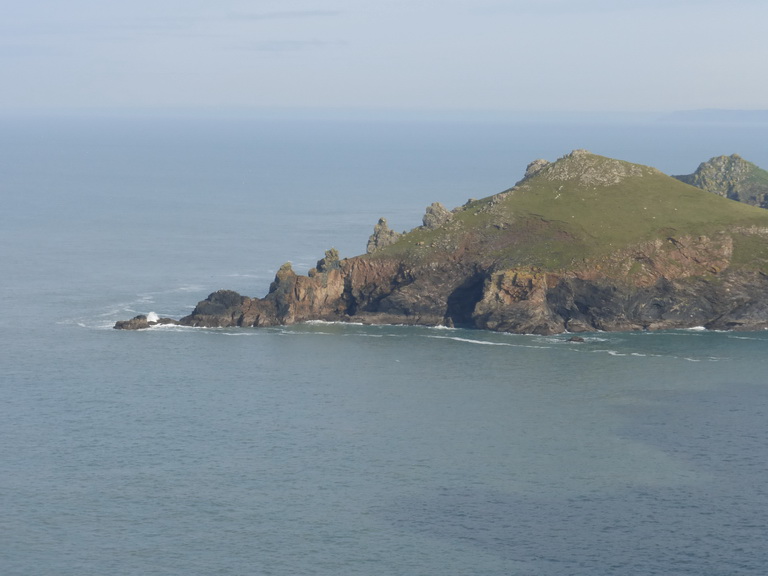 Storms Abigail and Barney had passed through leaving some lovely late November weather, warm and still. We grabbed the opportunity to complete one last long stretch of the Coast Path before the end of the year, picking up where we had left off at the Camel estuary.

This time we were on the eastern side which meant starting with the delights of Rock and Polzeath. We were promised a walk which would start ‘easy’ and end ‘strenuous’.

Almost immediately after leaving the ferry, we detoured around Brea hill to see St Enodoc church and to pay our respects to Sir John Betjeman. The little church which was almost literally dug out of the sand in the C19 was delightful, circled around by a sheltering hedge of tamarisk, its little spire sharp against the bright blue sky.

The church is set in the middle of a golf course which, even by golf course standards, was crisply prepared and empty of golfers. We suffered the usual warnings of golf balls driving to left of us, to right of us and ahead but with little indication of what we should do as a result.

The avid notice-writers really struggled with one word however, mangling their grammar to avoid any mention of the c*,  s* words: or even ‘poo’. Dog owners were warned to ‘clear up after their dogs and remove it to be disposed of’ (sic). How wonderfully British. It is ‘it’ you know, … ‘it’.

The same person had obviously been at work in Polzeath where it seemed the dog itself was to be removed.

Having rocked on a rock in Rock – see previous postings – we made our way past the white houses of Polzeath, each set in its dull garden staring northwards towards the sea. They did look very cared for with extra signs, railings and trim new paths, rather as though some minister or other was likely to be coming on holiday there. They were clearly doing more for less.

Eventually we started to leave buildings behind us. Looking back the sight of Stepper Point, Gulland Rock and Trevose Head reminded us from where we had come. The air was still, the sea flat and a delicate winter shade of greeny-blue.

Rounding Pentire point, we were at last out of sight of habitation and alone on a lovely meandering path set on a ledge above a long golden slope to the sea. The bracken had died back and carpeted the cliffs in the golden colours of autumn.

The dominating sight of the Rumps, Iron Age fort, soon came into view and it was here that we stumbled on the small plaque to Laurence Binyon who composed his famous poem while wandering these cliffs. The trenches of WWI felt a very long way away from such still beauty.

They shall grow not old, as we that are left grow old:
Age shall not weary them, nor the years condemn.
At the going down of the sun and in the morning
We will remember them.

The profile of the Rumps set off other thoughts for it was clear that the fort was not only protected by a series of ramparts but also one of the best Cornish dragons that we have yet seen, a rival for Cudden Point. A series of pointed spines ran up his back, his nose just showing above the water level.

It is good to know that Cornwall is so stoutly defended, the dragons’ noses, waiting lest a hostile invader should attempt to approach the Duchy at which point they will no doubt rise, roaring and breathing fire once again.

When others are burning effigies of C16 Catholics on their bonfires, or setting off beacons, we plan to arrange a series of burning barrels so that the smoke can once again emerge from these dragons’ nostrils. They can live again.

We debated why Iron Age forts were needed and could only come back to testosterone-fuelled avarice and desire for power.

This was a glorious section of cliff: tall and remote with easy going, a series of small rocky coves and signs of natural arches and caves below us. One of these was the strangely-named Lundy Cove with the enormous Lundy hole collapsed cave where the water swilled gently over the rock platform.

As always, we were grateful for the lack of fussy notices telling us to keep back from the edge. It will happen one day. Polzeath will take over.

Before long, Port Quin came into view, the shape of the Droyden castle folly emerging above the hill. Built as a banqueting house in the C19, this was a businessman’s conceit, now passed across to the NT as a holiday home.

Below was the wide and calm inlet of Port Quin with its pilchard cellars at the end. It looked like a wonderfully sheltered natural harbour but for a dangerous-looking rock at its entrance.

The cellars had also been converted to holiday homes but the remnants of the pilchard activity could still be seen. A series of brick-protected openings were visible. These would have held the fixed ends of the compression bars used to press pilchards in their barrels.

These are probably the best examples to be seen anywhere in Cornwall.

One night the fishermen of Port Quin went out to sea. None returned. Binyon’s lines could as easily refer to them. 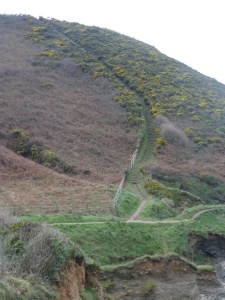 We were expecting the going to get tougher from here onwards – rising to ‘strenuous’ – and it did. A series of seemingly unnecessary steps along reedy cliff took us up and around: lung-bursting but not terminal.

The descent into Pine Haven was a long staircase but thankfully we were tackling it in the right direction with nothing but a long slope up the other side to Lobber point. The reverse would indeed have been ‘strenuous’.

Port Isaac emerged as we breasted the hill, and we prepared ourselves of Doc Martin spotting: each building scoring one point. It was an easy game but we had forgotten about the Fishermen’s Friends for every workman in the village seemed to be singing.

It is another lovely fishing village and natural harbour, helped by a stout breakwater which must keep out the worst of the northerly gales.

Eventually, we reached our parked car. We had walked about 12 miles in 4.5 hours.

The familiar shape of Tintagel had been haunting us for some time, its square headland hotel destroying the natural outlines. This would be our next destination but it would have to wait for the new year.  For now, our long distance boots are being hung up to dry.

Long walks in the short winter days are too risky but you never know: Cornwall can always surprise one with a burst of wonderful winter weather.

Rocking on a rock in Rock 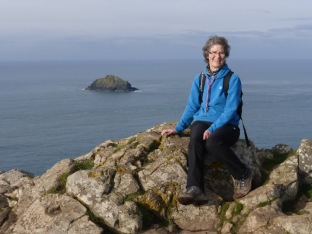 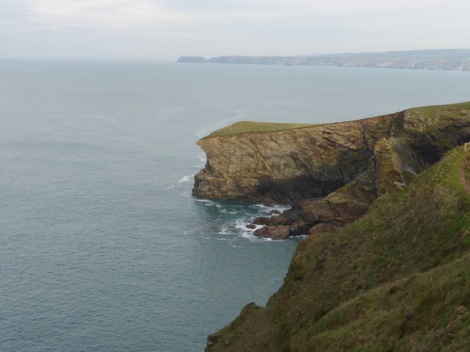 2 thoughts on “Rock to Port Isaac”