Tintagel church can be seen from miles around, standing boldly on the cliff top within a stone’s throw of the island and in stark contrast to the hideous bulk of the C20 Camelot hotel.

Simon Jenkins gives it three stars, praising its ‘wild hilltop setting’. This puts it on a par with Altarnun, Blisland and St Germans.

It is also praised for its ‘original’ Norman layout with two transepts and no side aisles.

The interior is certainly striking with rough whitewashed walls and some narrow window openings. The rood screen is dark and cuts of the light and welcoming chancel.

The roof was repaired in the C19 with a familiar arch and wind-braced construction.

There is much to enjoy. There are two fine C15? chairs with strong carved images, bench-ends showing the Passion have been re-used as a form of low reredos and there are some lovely hinges on the south door which are said to be very early.

The south transept contains a stone bench around the walls, a Roman milestone pillar and a small 1430 brass  to Joanna Kelly but the area was faintly unsatisfactory, a green mould being sadly very evident.

There have been several more recent donations such as statues and stained glass but they did not lift our spirits significantly and we came away feeling that Simon Jenkins had over-marked the church, certainly in comparison to simpler churches like Gunwalloe or Zennor. The Norman nature was strong but the effect was almost damaged by the C19 roof and the rood.

We did enjoy the touching attempt at verse, no doubt written by a former vicar, Christopher Chilcott, who was mourning the loss of an infant who shared his name:

This was too sweet a babe for earth, thus Fate
In paradise did him oculate
What heavenly joys at God’s right hand thereby
This blessed innocent is gone to see
We have lost in him, oh pity our complaint
A hopeful child but he’s gone to be a saint
No more therefore of tears but cease to weep
He lies in Abraham’s bosom, let him sleep. 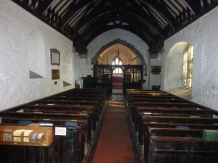