The church of St Mary the Virgin can be seen for some distance, its tall tower very visible with its four pinnacles. It is unsurprising that it was struck by lightning several times even as recently as 1935.

Like North Tamerton, the tower has a band of quatrefoil decorations encircling it at various levels, including, we are told, the image of two hounds chasing a hare.

High up on the second section is a statue of St Mary.

Inside, the space is large with the two aisles showing their different periods. The south aisle is C14 with polyphant stone pillars: the north C15 with slim granite ones. Henderson refers to it as presenting a ‘cold appearance.

JP St Aubyn worked here in 1877-81 and managed to retain the essence of the wagon roofs and open space.

The east window is off the centre line, a displacement emphasised by the placing of the rood.

A rather fine slate memorial to Margery Gayer (d1679) attempts some figurative poetry:

Since man’s compared to an inverted tree
To this blest soule that name applied be,
Sweet words, pure thoughts, good works with her endear’d

Her leaves, her Blossom, and her fruit appeard,
Her pith was Vertue, Chairty her Rinde
One Verdant Branch from her is left behind,
Death hath not cut her downe, who rather is
To be a tree of life, in Paradice,
Short was her life, yet lives she ever
Few were her daise, yet dyes she never.
She breath’d a while, then went to rest
God takes them soonest, whom he loveth best. 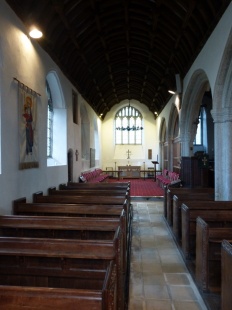 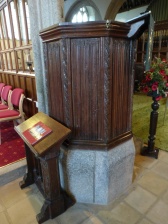