The gorgeously-named St Symphorian is tucked away in a large churchyard in the centre of Veryan, probably the largest village on the Roseland.

The layout is unusual. The tower is on the south side, close to the hill and the main porch is at the west end although, strangely, there is a south porch close by.

It is a long church with a nave and north aisle, a south transept (filled with the organ) and the tower on the end of this.

The main porch is a delight as it is filled with little Norman or medieval carvings. At eye-height on either side are some simple little smiling faces, while over the door is a single head.

Having the entrance at the west end makes the entry into the church interesting for the altar is right in front of you. The stone floor rises gently towards the altar.

The interior is light and airy thanks to the lack of moralising Victorian glass. The granite pillars have limestone capitals which have encouraged some decorative carving.

Three generations of the Trist family were rectors here in the late C18 to mid C19 and they made their marks on the church and left their memorials.

A strange consequence of the long aisle is the current arrangement for the sanctuary. Where one would expect to see choir stalls is a large empty space meaning that the altar is a very long way from the congregation, the choir and the priests.

Two sections of rood screen, or possibly old bench ends, are preserved as tablets on the wall.

The enormous churchyard is rather overgrown – rather than ‘nicely wild’ – and contains some interesting monuments. The grave of the 19 men of the Hera, a German ship that foundered in February 1914, is said to be the longest in Britain. Stones down its length record the initials of where the crew lie in their pairs. 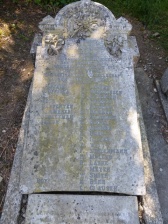 One thought on “Veryan church”