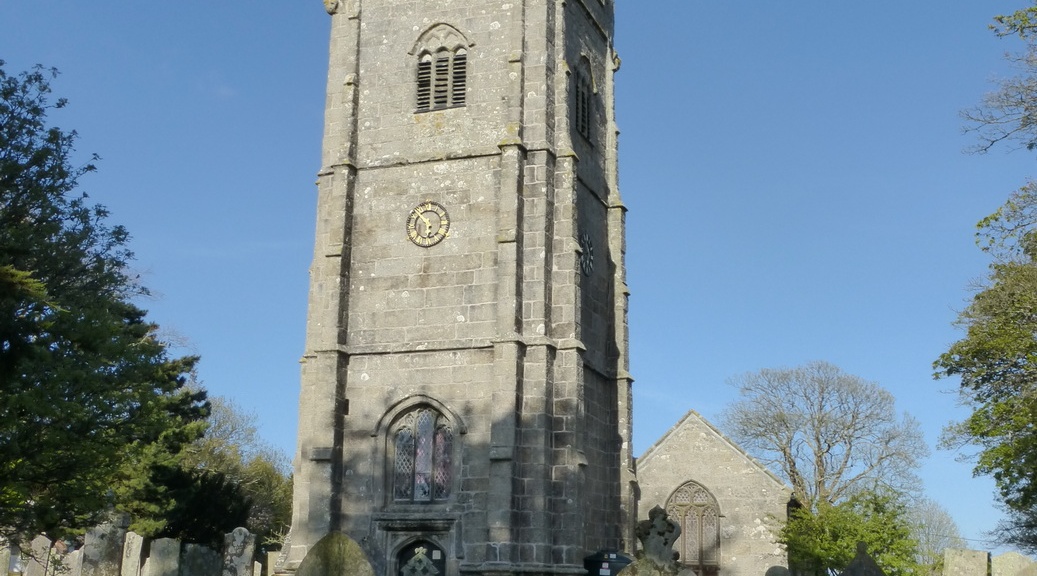 St Stedyana sits in the middle of the slightly straggling village of Stithians close to a large former vicarage. It has a fine three stage tower but the overall effect of the church is somewhat damaged by some heavy-handed Victorian restorations. It consists of three aisles, with the northern one truncated.

The churchyard contains some interesting table tombs including one that bears a charming heart motif, almost as though it is the tomb of a card-player.

The interior is broad with low, long arches giving a sense of space. The walls are of rough whitewashed stone.

Thankfully the Victorians did not fill the windows with their heavy glass and the interior is therefore light.

The original roof has been replaced with a wind-braced roof which has none of the charm of a wagon roof.

The font is an octagonal lump of granite and the pulpit a plain Georgian piece. The monuments  are the usual round of plaster work, interesting but not outstanding.

One small brass catches the eye. Of uncertain date it is inscribed in gothic lettering and appears to be an instruction to the pastor (rendered here in modern spelling):

The office set to pastors true (by Christ), his flock to guide
Is unto them his word to preach and from it never slide
The duty to the flock assigned, god’s words is to obey;
And on the same to stay themselves, with faith and hope allway.
For here on earth as pilgrims strange, we daily seek for rest;
Yet finding none, because we be with sinful flesh oppressed.
No state on earth, no pomp may last, no flesh can long endure
But being earth to earth, shall turn of this we be most sure
Then (since our days be few and ill, while we do pass the same)
Let us redeem them doing good, not seeking praise and fame;
But glory, praise and honour due, yield we to god of right;
Whose promise is (all darkness past), to give us his true light.

This is indeed a curiosity. Why was it produced and why in such a manner?

Outside in the churchyard there is a fine wheelheaded cross bearing a figure with outstretched arms on both sides.

There are also two Victorian curiosities. The first is a small gate in the churchyard wall close to the vicarage, installed no doubt by the Victorian vicar keen to find the shortest way to his church. He is allowed a porch so there is a northern porch but no porch over the southern door which is the main entrance for the congregation.

The other is a small building by the west entrance to the churchyard, supposedly constructed using scraps from some earlier restoration (note the small mullioned window). Its original purpose is unclear. It is now on of those ‘useful dumping grounds’ and home for pigeons. Was it perhaps a gardener’s store or, like a similar building at Mawnan, for storing a wheeled bier? 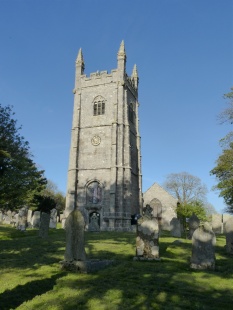 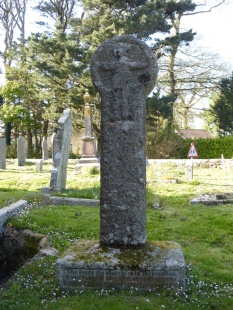 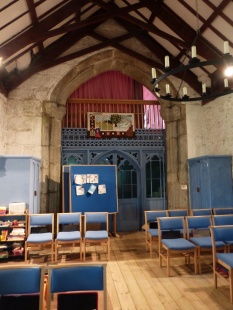 Stithians: the tomb of a card player?