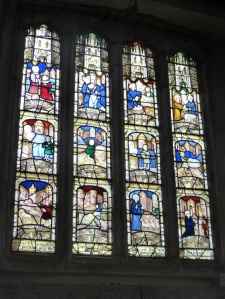 Above the north door of St Neot church is a ‘poem’ about the saint. Enjoy the story as best you can:

Consuming time Neotus flesh and bones to dust translated
A sacred tomb this dust inclosed and which now is ruinated
Though flesh and bones, and dust and tomb through ? of time be rotten
Yet Neot’s fame remains with us which ne’er shall be forgotten
Whose father was a Saxon king Saint Dunstan was his teacher
In famous Oxford he was eke the first professed preacher
That there in schools by quaintest terms be sacred themes expounded
Which schools by his advice the good king Alfred well had founded.
But in those days the furious Danes, the Saxons’ peace molested
And Neot forced was to leave that place so much invested.
With hostile spoils then Amesbury his place of refuge was
Within the shire of Huntingdon where since it came to pass
That for his sake the place from him doth take its common name.
The vulgar call it now St Need’s their market town of fame
There Affric built a monastery to Neot t’was behested
And Rosy wife to the Earl of Clare with means the same invested
For maintenance after time where long he did not Stay
But thence enforced by furious Danes beforward took his way
To GuerriersStoke for his repose this place so called of yore
But now best known by Neot’s name more famous than before.
For why a College here a clerks he had whose fame increased
When as his corpse were clad in clay and he from hence deceased:
Some say his bones are carried hence St Needs will have it so
Which claims the grace of Neot’s tomb but here to we say no.

It is said that the saint was actually a monk of Glastonbury, a friend and relative of King Alfred but this may confuse Celtic and Saxon traditions. The bones of the saint were probably moved from St Neot’s in Huntingdonshire in the C10.

The saint is said to have been fed by one fish a day.