The dominant feeling of St Issey is of Victorian tidiness.

The church stands on the road side in this small, rather linear, village, surrounded by a large open greensward of a churchyard for all the gravestones have been moved to the edge where they stand in curves like sections of standing stones, no longer protecting their owners. All very fine for mower, but give me a riot of overgrown spring growth, sprinkled with wildflowers, such as we saw at North Hill in the spring, or at Poughill, any time.

At some point in the C19, the tower collapsed, taking chunks of the west end with it. JP St Aubyn was called in and he set to work tidying things up 1869-71. The result is a typical St Aubyn wind-braced roof and a chancel which is filled with Victorian stencil decoration, reminiscent of Burges’ work Cardiff Castle (ca 1865) or Pugin’s St Pancras Chambers.

There are other outstanding features of which two are sensitively handled if a little out of place amongst the medieval-revivalist decoration.

The reredos is of stone and probably late C14 (said to be similar to one at St Endellion). St Aubyn artfully ensured that it remained in situ and surrounded it with contrasting red walls which almost over-power the detail. Thankfully, the parish has added some flowers which relieve the apparent drabness of the stone.

Alongside is an over-decorated piscina – curiously on the north side – where St Aubyn went perhaps too far as the result looks like something from a Victorian withdrawing room.

Above the south altar is another carved gem: a stone pieta: said to be one of only nine in the country. This is difficult to see because of the lack of light but is well-carved. Mary sits with the body of Jesus on her lap, with two figures – perhaps monks – in the spandrels above.

St Aubyn resisted doing anything drastic with the elegant C12 plan and circular font which had already been restored in 1664, or to the well-carved stoup just inside the south door.

Outside, in the churchyard is a large granite cross of uncertain date while over the south porch door is a 1718 sundial reassuring us that ‘Time for none doth stay, so our lives decay’. A cheery thought to greet one.

Unlike neighbouring – and later – Little Petherick, we did not emerge wanting a deep breath of C21 air to relieve the over-decoration but, while grateful for the general cleanliness could have wished that St Aubyn had allowed a little more historic feeling to have survived. 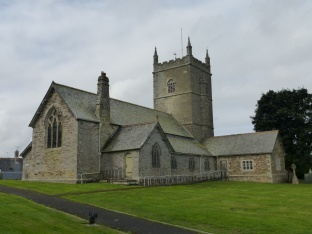 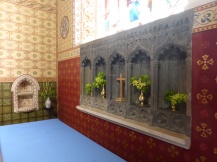