St Clement was once a massive parish, encompassing parts of modern Truro, and known as Moresk. Today, the church stands in a quiet hamlet on a hill just back from the Tresillian river. Although extensively mucked about in the C19, it is a gem.

Approached through a lych gate with a slate hung room above (see Kenwyn and Feock), its three stage killas stone tower is comfortingly rustic being rough and covered in lichen. Crude gargoyles poke out from its corners and the slate coverings to the bell openings giving it the illusion of a gentle medieval knight staring through his helm. 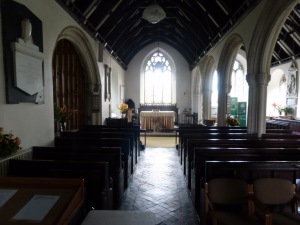 The lych gate is one of a group of small vernacular buildings and has had the usual random collection of uses from schoolroom to poorhouse to vestry, as well as the less usual use as a pigsty.

Inside, the church is conventional: a long south aisle and a north transept. Pevsner says it suffered a ‘severe’ restoration by H Michell Whitley in 1865. This probably destroyed a wagon roof and swept away any ancient benches but the result is not as bad as it sounds.

The north transept has been converted into a vestry/store by a transparent glass screen framed with rather unimaginative modern wood and some fragments of historic carving. This allows light through but also allows us to see the clutter in all its glory.

The restoration has left its legacies for the organ has an internal canopy over it, presumably to prevent dust from entering the pipes, and a fan is incongruously sited in the ceiling of the south aisle. This fan can have almost no effect at all. Its only possible benefit would be to dissipate some heat from the heating pipes which, curiously, seem to travel just below the ceiling thus ensuring that none of their benefit reaches the congregation.

There is a fine monument to Samuel Thomas which Pevsner describes as ‘one of the finest marble monuments in Cornwall’. One wonders whether the two allegorical  female figures refer to his wife and his sister, the latter being named on the monument. One seems to be holding an umbrella but closer inspection shows it to be a sunburst.

Alongside is an equally affecting monument to Rear Admiral Robert Carthew Reynolds.

At the back of the church, well hidden behind a spare piano and a portable ramp, is a charming but damaged early C18 slate monument to a series of Hankeys.

Outside, amongst the many beautifully carved slate headstones, is one with some carefully-crafted vicar-ish doggerel:
Weep not my husband dear / For now I feel no pain.
I leave a sinfull (sic) world /For my eternal gain.
Farewell my children dear / I leave you both behind.
Whilst you remain on earth / The Lord will be your friend.
Behold the place I lie / As you are now so once was I.
And as I am so must you be / Prepare for death and follow me.

They must have circulated such things in the Church Times of the day.

Outside, in the churchyard is the famous ‘Ignioc’ stone which seems to defy categorisation. The words Vitali fili Torrici (Vitalus son of Torricus) are pretty easy to decipher although the grass makes the last word a bit speculative, but the Ignioc is more difficult and open to various interpretations. It is said to bear ogham script on one side.

There is a reminder of the changing uses of the interior of our churches in a sign at the back of the church: ‘We need to raise an enormous sum of money to replace the roof, damp proof the floor, put in an efficient heating system, remove the central pews to make it a much more versatile space, put in a lavatory, improve the access – and those are the urgent things!’

Amen to most of those things but ‘remove the central pews’ stands out as something that sounds marginally less than urgent. Over time, fashions have changed and naves have been used to accommodate standing spaces, bench seating, box pews and then C19 pitch pine pews. Now we seek to remove them completely to create a ‘versatile space’. No wonder we travelling historians struggle to find evidence of the past. 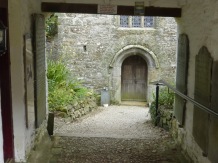 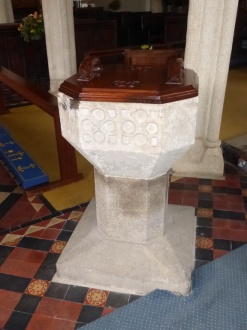 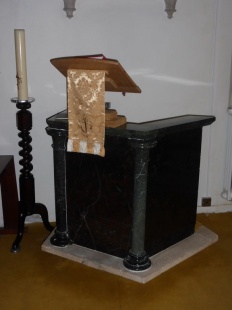 One thought on “St Clement church”