Holy Trinity is sited in the middle of the busy town of St Austell whose heyday came during the China Clay boom of the C19. The church benefited from this boom and was repeatedly restored and enhanced during that century.

Architecturally, it is a very perpendicular church with battlements. First impressions reinforce the main reason it is given a star by Simon Jenkins: the massive ‘Somerset’ tower which is rich in figurative carvings. There is also a series of carvings on the outside of the church which have been described as a ‘visual creed’.

The restoration work started with JP St Aubyn in 1870 and was later taken on by GH Fellows Prynne at the end of the century, using the visual themes of the time. 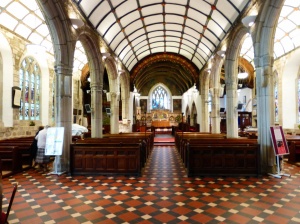 The porch is the first indication of wealth. Two storied, it once had an upper room and features an elaborate double arch and charming medieval stoup.

Inside, the church is light and airy as one might expect with C15 perpendicular architecture. Its tall arcades seem to reach right up to the roof.

It has a nave and two full aisles with no transepts. It is hard not to spot that the chancel is at an angle to the nave but the tower is also off-centre. The traditional reason for this is that it is meant to reflect the droop of Jesus’ head on the cross but more often it is a mundane reason to do with the foundations. Truro cathedral had to avoid a road while the most extreme we have yet found is at St Ervan.

The colour scheme is an interesting mix of rough stone and white plaster which helps provide a variety of textures. There is also a well-restored wagon roof in the nave. The chancel has been given a new roof which has been painted in a Gothic style with uplifting pictures and texts.

The baptistery in the south west corner contains a fine Bodmin-style Norman font and a pillar piscina, surrounded by marble, alabaster and glass. Despite being from 1923, this feels very Victorian in style and, taken with the chancel, highlights the slight feeling that one is entering the House of Commons or the old St Pancras hotel.

It deserves its star. By Cornish standards it almost deserves a second but it might pass relatively unnoticed in Somerset.

A decayed cross, moved here in 1891, stands close to the church. 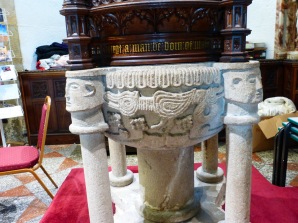 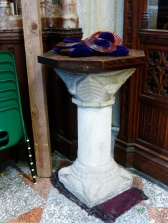 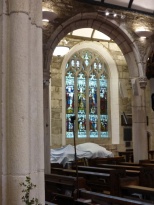 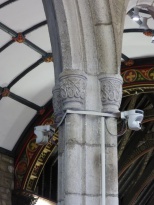