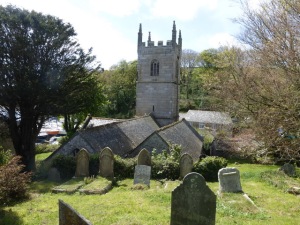 St Anthony rivals its namesake on the Roseland, or St Just in Roseland for position. All are set in idyllic positions close to the water; two have boatyards almost attached; both are surrounded by greenery. Perhaps St Just shades it by the beauty of its planting but it is a close call as Gillan Creek is very secluded and peaceful.

St Anthony has many of the features of its neighbours even as far as the cat/dog flap in the west door but has a lower ceiling.

Although it has been extensively renovated over the years, the work has not intruded on the feel of the church which is enhanced by some (rather low hanging) brass chandeliers.

It has its unusual features, though. What looks like a rood stair was accessible from the outside; there is a small wood carving of Last Supper, said to be C14 or C15 and to have come from Newstead Abbey; there is a lovely modern engraved-glass window of bell-ropes; and there is a decayed medieval cross head in the churchyard.

One day we will approach this church by boat for that would be to do it real honour. 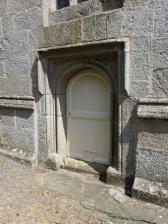 The west door with cat flap