St Probus and St Grace is justly famous for its enormous ‘Somerset’ tower, the tallest in Cornwall and identical to that at North Petherton. This was apparently built after a little local difficulty between squire and congregation.

Simon Jenkins gives the church a slightly  generous two stars. As well as the lichen-encrusted tower, he is inspired by the wonderful Georgian memorial to the Hawkins family which, he says, is more suited to Westminster Abbey than a village in Cornwall.

Everything about the church is grand: enough to bring tears to the eyes when thinking about how it will be maintained in a time of dwindling congregations.

It is one of the largest churches in Cornwall, probably ranking with the likes of St Columb, Padstow, Fowey, Bodmin, Liskeard and Launceston. Unlike the other towns, time has not helped the ‘large village’ of Probus (or Tregony) to prosper, probably thanks to the nearby upstart, Truro.

The 38m (125ft) tower is indeed magnificent with quatrefoil decoration and a rich coating of lichen.

Inside, three wide aisles are separated by a high and elegant arcade which allows the light to flow into the centre of the space. Only the rood screen obstructs the view of the fine C15 east end window, for which we can probably thank the C19 restoration by G E Street.

The main feature is the 1886 reredos by JP St Aubyn which is sparkling gold mosaic, if you like that sort of thing. The Hawkins memorial, on the other hand, which hangs improbably high up on the south wall, is obstructed by the screen and features Thomas Hawkins and numerous flying angels.

Other than these, there are few stand-out things to look thanks to the various Victorian era restorations. The font is elegant in a simple (probably) C15 way and stand centrally at the west end. There are the usual stocks which need a home and are curiously stored in the south porch – the church has both north and south porches – along with a very modern traffic cone.

Outside, in the churchyard, is the most magnificent tomb to another Hawkins which features enormous kneeling soldiers.

Stepping back, it is the size and lightness of the interior and the great tower that remain as abiding memories. 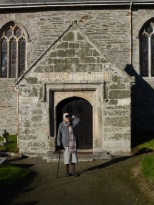 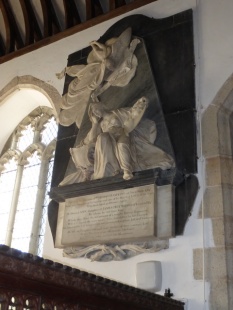 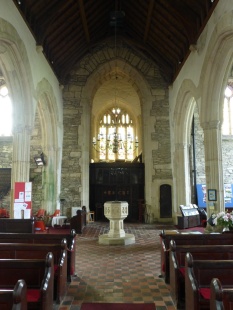