St Felicitas stands high on the edge of the Towans overlooking Hayle’s Copperhouse pool. Originally dedicated to St Piala or Phillack, it was latterly transferred to St Felicitas.

Piala was the sister of Gwinear and came over from Ireland accompanied by him and 770 companions, only to be executed on arrival. It was, perhaps, unwise to arrive with quite such a large number of people who must have looked like a small army.

Charles Henderson says that the church was highly-interesting before restoration while Pevsner calls the 1865 work by William White ‘thoughtful’. We are inclined to agree with Henderson and feel that much of the Cornish nature of the whole has been sacrificed to Victorian tastes.

There remains an enjoyable detective hunt to work out how White adjusted the pillars, adding serpentine shafts, to give importance to the chancel arches and to create springing points for the light-weight wrought iron rood screen.

There is also an object lesson in changing priorities in the movement of the priest from the sedilia in the sanctuary, via a set in the ‘usual place’ on the south west side of the choir, to the single modern lectern which dominates the screen entrance.

Incorporated into the altar – you will have to lift the fabric – is the original stone altar or mensa, complete with its five crosses. This must have survived the Reformation’s demand for a simple wooden table.

There is much of interest outside. A small Chi-Rho stone can be seen over the main south door and close by is a coped or hog-back stone which is one of only four in the county.

There are several crosses. The best is the one by the main entrance which contains an elongated figure of Christ. On the other side of the entrance, on the ground, is the head of a wheel-headed cross.

There is another, rather mutilated, wheel-headed cross by the separate vestry building which stands alongside an inscribed stone. Pevsner gives the almost indistinct inscription as being Clotvali mobratti while a leaflet inside the church, it claims it says ‘Here in peace went to rest Silvanus, husband of Cunaide. Here in the tomb he lies. He lived 33 years’. Given what is visible on the stone, we are inclined to agree with Pevsner.

The old vestry building is also interesting. Set on the boundary, like so many others, it is two-storey with entrances at both levels. Its prime interest is that it is constructed of scoria blocks: blocks consisting of melted slag from the nearby iron foundry which gives the surface an unusual texture. It also makes it very dark and oppressive which perhaps explains why it is thought to have been used as a prison.

We have one small cavil which is very far from unique to Phillack. Churches were not designed to have storage or display space. Some have created these at the base of the tower or in well-designed cupboards. Some have invented display racks for the plethora of leaflets. Here in Phillack we saw one of the less successful displays: a helpful plan of all the gravestones prominently displayed in the north aisle, but almost unreadable behind thick plastic which, we felt, had once been wrapped around a new mattress. The stocks on the floor for the perpetrator.

Full marks for trying but a ring file with pocket envelopes might have been better. 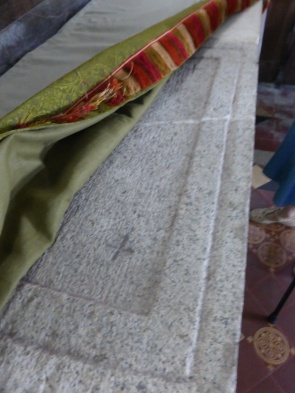 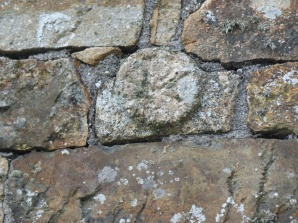