St Gluvias, as it is better known, stands on the opposite side of the valley from the historic town of Penryn. The existence of the former Glasney College must have captured most of the residents’ attention until the Dissolution. Thereafter, the church became the parish church.

The tower, with its smart red door, dominates a steep and twisty hill. Its stone work is oddly vernacular, consisting of what look like large rounded beach stones. A few years ago they eased the otherwise horrendous weather-strip pointing but there is still something over-restored about it. 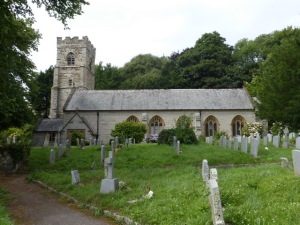 The main body of the church is quite clearly of a different date, being constructed of smooth, well-jointed stone.

The first time we visited the church, it was locked and barred with no sign of where to get the key. It therefore went straight into the Hall of Shame but a chance encounter revealed a sign showing it was open every day in August and we took our chance.

We were not encouraged by Charles Henderson’s damming verdict: ‘The body of the church was rebuilt in the Georgian style in the C18 but restored to C15 form in 1883. These successive rebuildings have robbed it of all interest.’ Ouch! 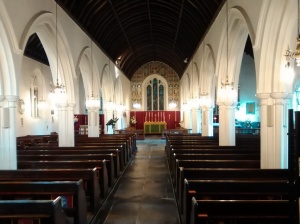 The foot-scrapers at the porch door gave it away as a piece of St Aubyn’s work but the result was actually a pleasant surprise. The interior is light and spacious with some very un-Cornish white stone pillars separating the nave from the two side aisles and a simple interpretation of a single wagon roof. There are no transepts.

St Aubyn had resisted the temptation to insert a rood screen or insert sanctimonious Victorian stained glass. The external windows are Victorian interpretations of the originals and regular in form.

Sir Ninian Comper had his go in the C20, reducing the height of the chancel and proposing a new arrangement of the choir which, thankfully, was not carried out. The pulpit remains stubbornly against the south wall from where there is a great view of the congregation which must be fine when the church is full but a bit lonely for the preacher when it is not

The east wall contains a series of mosaics of the evangelists and other saints which is the only extravagant decoration.

Both side aisles have altars. The south one, having formerly been the Enys aisle, is surrounded by various memorials to the local Pendarves family of Roscrow which wraps around the window in an unusual manner.

It is certainly un-Cornish as a church interior but well cared for and hardly deserving of Henderson’s comment.

Possibly a basin from Glasney College