St Pol-de-Leon stands proudly tall and, like neighbouring St Buryan, can be seen from far out to sea.  The parish church of Paul, Mousehole and Newlyn, it probably stood in farming land while the two villages contained their small communities of fishermen.

The church is a surprise: much larger inside than expected. It is tall, has a nave and two aisles and is well-lit by windows which have not been obscured by acres of well-meaning Victorian glass.

It also appears to be well-used and popular with signs of activity all around the place. Turning a religious building into a lively community centre is a difficult challenge and yet Paul seems to be achieving this even if it means there is a ball-pit in front of a small west-facing altar at the end of the north aisle. 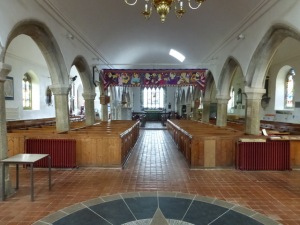 There are original box pews -how on earth did they survive the Victorian restoration? – and a large and lively fabric hanging which almost substitutes for the (welcome) lack of rood screen. At St Cuby in Tregony, the equivalent hanging is a rather less-welcome projection screen. No doubt historians of the future will record the passing of such things with sadness.

One peculiarity in the building is a break in the regular arcading between the nave and north aisle where the rood might have stood. Was this perhaps a tomb or Easter sepulchre? No one seems clear

There are two memorials of note. The first is very simple one to the crew of the Penlee lifeboat the ‘Solomon Browne’ of 1981, still raw in the memories locally. The other is to Dolly Pentreath, erected by Prince Louis Bonaparte for reasons that can only be guessed at. Dying in 1777, she competes with John Davey at Zennor (d1891) and comes out the winner in folk memory.

There is also a fine wheel-headed cross rather curiously positioned on top of the churchyard wall. 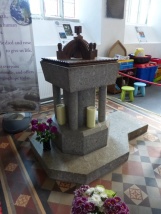 The pulpit and the break in the arcading

The consequence of a shared space

One thought on “Paul church”