St Swithin’s is set in a wooded dell beside the infant river Neet, close to St Swithin’s well. From the hill above, there is little beyond a glimpse of two large perpendicular east windows to suggest that this is anything other than another Cornish church.

In fact it is a wonderful Georgian survival which avoided the occasionally deadening hand of the Victorian restorers.

Even allowing for Simon Jenkins usual habit of over-marking anything Georgian, it is hard to argue with his award of three stars for the church. He quotes Betjeman’s description of it as ‘the least spoilt of Cornwall’s churches’ and says ‘Once again Cornish woodwork steals the show’.

We saw it on a bright sunny day when the sun was streaming in through the windows, filling the tall aisles with light. The tall arcades with their slim pillars allowed the light to cascade around the interior.

The three wagon roofs, of almost equal height, are fresh and bright and add to the feeling of space within the church.

The woodwork is indeed splendid, not so much for the individual pieces as for the ensemble. The C15 bench ends are lovely and have the usual collection of images of the Passion along with a medley of dragons, figures and coats of arms.

The ‘Ascension’ bench end wittily shows two foot prints and the legs of a man disappearing into heaven. The church was originally dedicated to St Andrew and one bench end shows Saint Andrew’s saltire with four drops of rain in the quadrants: St Swithin’s raindrops.

The reredos in the south aisle includes some interesting carved panels which may have come from a former box pew.

The painted remains of the rood screen can be seen by the main door.

And then there are the C18 box pews, preserved in the north aisle. These are so tall that within them one could carry on a board game during a dull sermon, without anyone outside having any idea.

The floor of the open chancel – the three aisles are almost equal in length – is tiled with C15 Barnstaple tiles which rejoice in a variety of designs such as pelicans and beasts. These were removed at the Reformation and stored in the crypt where they suffered water damage. At a later restoration, they were recovered and re-installed while the crypt was back-filled to prevent further damage to the foundations.

There is a lovely simple Norman font with a cable moulding around it; a large wall painting said to show the story of Isaac; a large monument to Sir John Chamond (d1624) resting on a elegant elbow; and, if you like such things, another large plaster version of the C17 royal arms still showing some of its original colour.

In short, there is much to enjoy. We agree with Simon Jenkins.

A short distance away is the handsome Launcells Barton which has a fine Queen Anne extension. 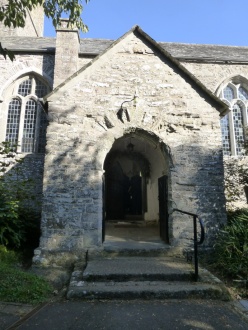 Launcells: a piece of the original rood screen