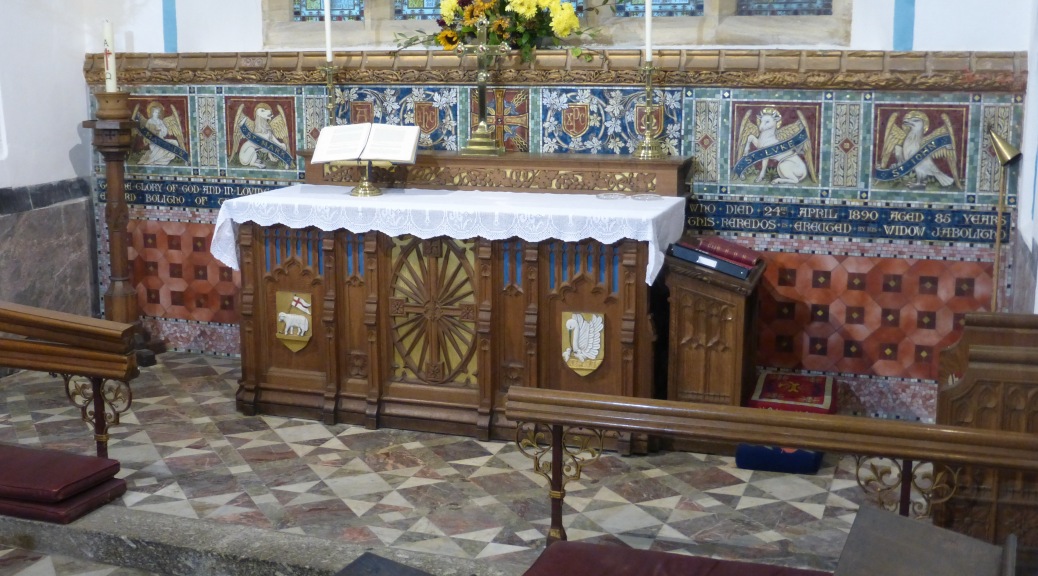 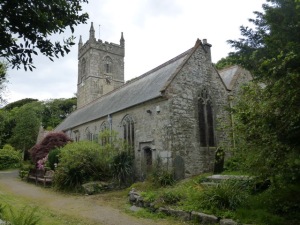 Gulval church stands in a wonderfully verdant rectangle at the centre of a neat, rather Victorianised churchtown which feels faintly un-Cornish. Shrubbery abounds, even along the south side of the church.

Charles Henderson says that ‘its interest and antiquity have fled before the invading forces of modern munificence’, a reference to the large amounts of money given to the church by the Bolitho family whose home at the time was just down the hill at Ponsandane. The family tradition is ‘married in Madron and buried in Gulval’.

It seems that the church underwent several restorations in the C19. Having one vicar – William Wingfield – from 1839 to 1913 certainly ensured continuity of style, helped, no doubt, by the involvement of JP St Aubyn whose family home was visible from the church. Certainly, they seem to have enjoyed the late C19 Gothic/Arts and Crafts style.

There are three co-terminus aisles, the north one having been added by St Aubyn, under a simulated wagon roof, a light rood screen and a brightly coloured chancel ceiling. The chancel walls are the oldest part of the structure with everything else having been re-built at some point. The furniture betrays its C19 origins and, for once, there is a little sign of old bench-ends having been re-used or an original pulpit.

The font is C14, of the St Ives style with angels bearing the arms of Kyvael and St Aubyn, while a rather charming wooden chair (of C17 ) is tucked into the north transept (hidden away behind a cardboard box).

The chair is said to be a precentor’s chair from Norfolk Collegiate Church with a pre-Reformation panel inset into the back. The seat carries a picture of a merman while the back has a well-carved illustration of a man and a club apparently dealing with someone who have been stealing fruit. The precise story escapes me.

But it is the Bolitho chapel which catches the eye as you enter the church. It consists of an ornate marble altar facing north which is currently used to display a variety of odds and ends. Around it are plaques to various members of the family. Further investigation shows that many other elements in the church were also funded in whole or part by the same family: the rood screen, the chancel floor, the elaborate reredos, the altar and several windows.

The chancel ceiling reflects a pre-Raphaelite tradition in English churches with angels, scriptual texts and hammerbeam angels, echoing the great churches of East Anglia in a style similar to that in Huntingfield church in Suffolk.

The south east chapel is known as the Harris/Tythal chapel in memory of another and rather earlier local family. A fine monument to two C17 gentlemen adorns the north wall.

A deep breath is required as one leaves the church and Charles Henderson’s words resonate: modern munificence indeed.

Outside, alongside the porch was a display of carved stone which included a section of window tracery, an inscribed stone set upside down, and the remains of a lantern crosshead set on a large stone with more carving.

Note: the first time we visited Gulval church, it was closed and it thus entered our Hall of Shame. This visit was a lucky chance as a discussion group was in progress. Don’t rely on it being open when you visit. 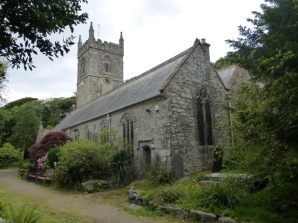 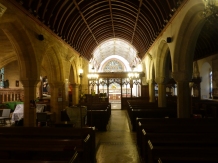 Gulval: an impractical piece of furniture 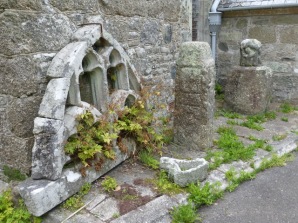 Gulval: the fragments of stone cross shaft and window tracery