Spring had arrived, in a hurry. In a short period of time, leaves had sprung out from branches, fruit trees had burst into blossom, the hedgerows had filled with flowers, and the sun was beating down on a bank holiday weekend. Better still, it had not rained heavily for at least a week and the land was not water-logged.

We picked up where we left off, in a desolate spot somewhere in the middle of Davidstow airfield, possibly the easiest place to find a parking space. That is if you do not mind parking next to a sign which says ‘Aircraft land and take-off from here’. I wonder if the sheep can read.

The first mile was the dullest walk we have done for a long time: one mile straight, on a level road with nothing but sheep and the occasional passing car for company. Eventually we forked right and headed for Old Park. Here we were joined by some brightly-coloured Wheatears which hopped from rock to rock, confused by two walkers on a bright morning. Beside us a positive cavalry of shaggy moorland ponies munched on fresh silage.

Behind us was a wide desolate, flat landscape fringed by Crowdy reservoir and a few stands of trees.

Close to Old Park is the remains of the Roughtor Consuls mine: a few lumps of masonry and some humps and bumps. In the shallow valley below lay the source of the river Fowey which the guidebook calls ‘a boggy inhospitable area best left to the animals’. Neither the sheep, nor their baa-ing lambs seemed to object.

Rejoining a road, we headed downhill towards Bowithick, a well-cared for hamlet which fringed the rough ground of the moor.

Just beyond was a small stream, the infant Penpont water which would wind its way to join the river Inny. A charming bridge beside a ford provided a good place for a coffee stop.

The road then followed a contour, skirting the bottom of Bray and Carne Downs with rough rising ground on our right and increasingly lush well-watered fields in the valley to our left. Sheep to the right and cattle to the left. The going was easy and the roads empty.

The next two hamlets were in stark contrast to each other. West Carne had all the precision of a Cotswold village with the grass well-mowed, the saddle stones in just the right places by the drive, the houses fringed by some lovely granite walls. South Carne was a working farm surrounded by a mass of rusty metal and dead cars.

From South Carne we cut across country, following a path, through some lovely lush fields. These were the meadows of our youthful memories with wild flowers in profusion: bluebells, primroses, wood violets, wild garlic in abundance and some lovely bright white Lady’s smock (or cuckoo plant). These were not fields zapped by weed killers.

The path brought us out at Trewint, close to Five Lanes, the official end of this leg of the Trail but we had plenty of energy left and diverted to view Altarnun church, one of Cornwall’s greatest.

Altarnun is a little oasis, a series of well-maintained houses stretching down a short hill towards the tall-towered church where a troll’s bridge spans a bubbling stream. The church is in a league of its own for its magnificent carved bench ends.

We sat down to eat some lunch amidst bright primroses, daisies, brightly coloured azaleas and flashes of bluebell, watching the stream tumble beneath the bridge.

Returning to the main route, we passed into South Cornwall through a bridge under the A30 and headed south into the unpopulated country along the eastern edge of the south moor. In the distance, the bulk of Dartmoor was a hazy outline while below us lay the familiar rolling country through which the Tamar flows.

Roads and paths led us from farmstead to farmstead until we reached the ford at Trevague where our car was waiting us.

We could not resist the temptation to see if we could collect a stone circle before the end of the day and headed onwards to the abandoned barn at Clitters, and up onto the moor in search of the Nine Stones. Being only one metre tall, they eluded us but we found some interesting boundary stones which someone had gone to the effort of placing across the moor to delineate the boundary between Altarnun and North Hill parishes. I hope the sheep were grateful.

We returned to our two cars and found Davidstow airfield lost in a dense mist, on a day on which the sun had shone with real heat, suggesting why it was a less-than-ideal situation for an airfield.

We had walked 12.8 miles (gps) 11 miles (Google maps) in five and half hours of glorious sunshine.

The rolling valley of the Tamar 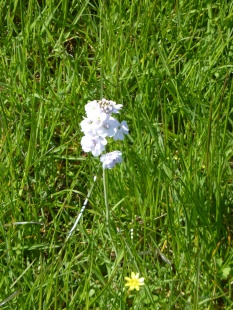 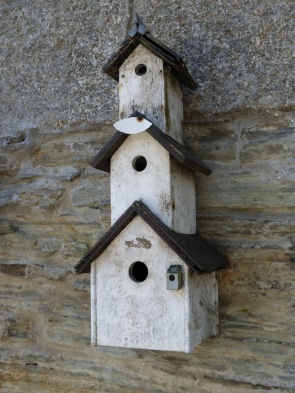