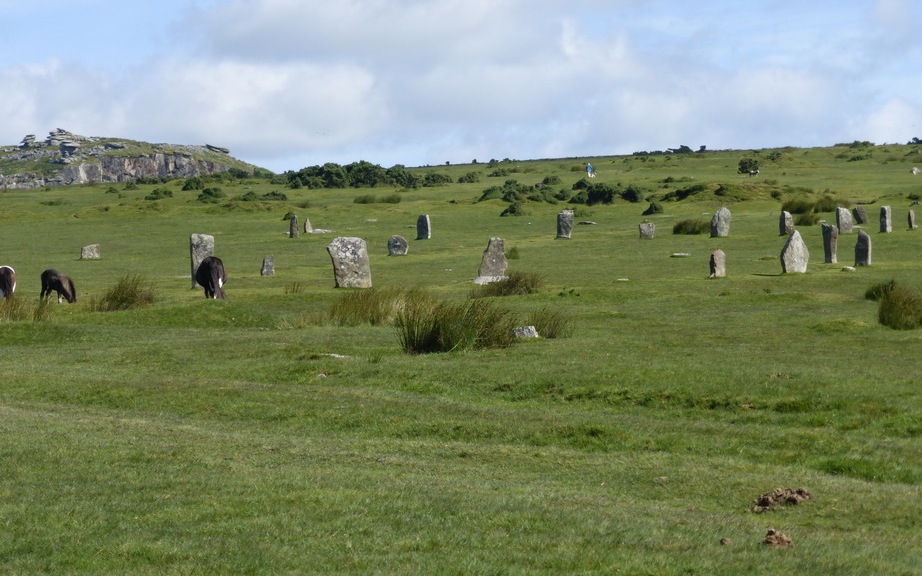 A bright sunny day after a few days of heavy rain tempted us out to start the Copper Trail which had been on our agenda for some time. We decided to start at the beginning at Minions where we discovered that Cornwall Council does have a sense of humour after all.

On the roadside opposite the road sign stood the tall Long Tom wheel-headed wayside cross which may well be an original menhir.

This section of the trail was full of interest and variety, ranging from ancient monuments churches and holy wells, to C19 mining natural delights.

The real start of our walk was at the Hurlers and Pipers. The Hurlers consists of three Bronze Age stone circles close to each other: a rare formation but no help in understanding how and why stone circles were used.

The trail proper starts by following a disused railway/tramway south from Minions. Lumps of granite are marked with holes where the rails were originally connected. A short distance ahead, the track descends the former Gonamena incline, emerging eventually at Crow’s Nest. To the east, the remains of the South Caradon mine bespatter the side of Caradon Hill with its enormous television transmitter.

Our next monument was Scillonian portal tomb of Trevethy Quoit, possibly Cornwall’s oldest structure: an enormous neolithic dolmen. Sadly a row of houses rather encroaches on its setting but on a fine day, there can be few better sights.

The purpose of the hole in the capstone is unknown.

In the distance, the tower of St Cleer was visible above the trees and we took an overgrown bridleway which would never have accommodated a horse, down the hill to Trecarne (where the houses all seemed to have ‘Carne’ in their names). Here, we left the trail to take a detour to visit St Cleer with its holy well and church.

The holy well, dedicated to St Clare of the order of Poor Clare’s – St Francis’ friend – is an elaborate structure which successive restorations has rather hemmed in with an inelegant wall. Its waters, we are reliably informed, will cure insanity but they are sadly inaccessible, which may explain a lot.

Alongside stands a C15 Latin cross.

We rejoined the main trail near South Trekeive. It would have been a short step to the C8 King Doniert’s Stone – or stones – with its inscription and lovely Celtic knotwork but we had already visited them on the way to Minions.

At South Trekeive we passed our third water treatment works of the day – always a delight – before crossing Bulland Downs and emerging at Draynes Bridge.

A short detour through some lovely woodland – a nature reserve – is highly recommended to view Golitha Falls. Here we found various people wandering around asking ‘are these the falls?‘ in the manner of someone expecting Victoria Falls on a charming Cornish river.

We can recommend the reserve for dog walking, adventures and picnics.

Back to the road and a steep climb up to the hamlet of Draynes  before an equally steep decline to the converted Methodist chapel at Lower Trenant. From here, the track took us into the lovely Periock Wood, following a stream up a muddy path towards Lower Bowden. Here the farmer had helpfully cut a track across an unharvested hay field to indicate the ‘right route’.

We emerged close to the almost invisible Berry Castle and cut across some open moorland before descending towards St Neot, hidden in the valley below. A quick detour to the hopelessly Victorian holy well brought us eventually to St Neot’s wonderful church with its incredible windows.

Here we ended the first stage of the Copper Trail. Our gps said we had walked over 12 miles in about 4.75 hours although Google Maps stubbornly suggests nearer 9 miles.

If the later sections of the trail are as full of interest as this section then we are in for a treat.

Cornwall Council does have a sense of humour 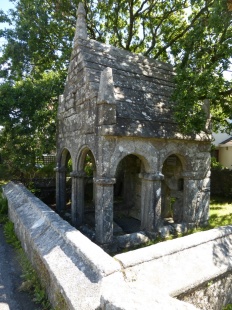 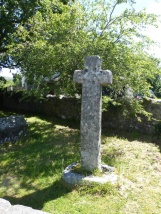 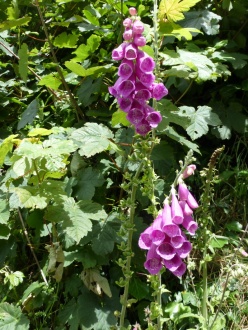 Flower of the walk: the foxglove 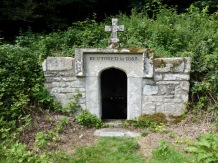