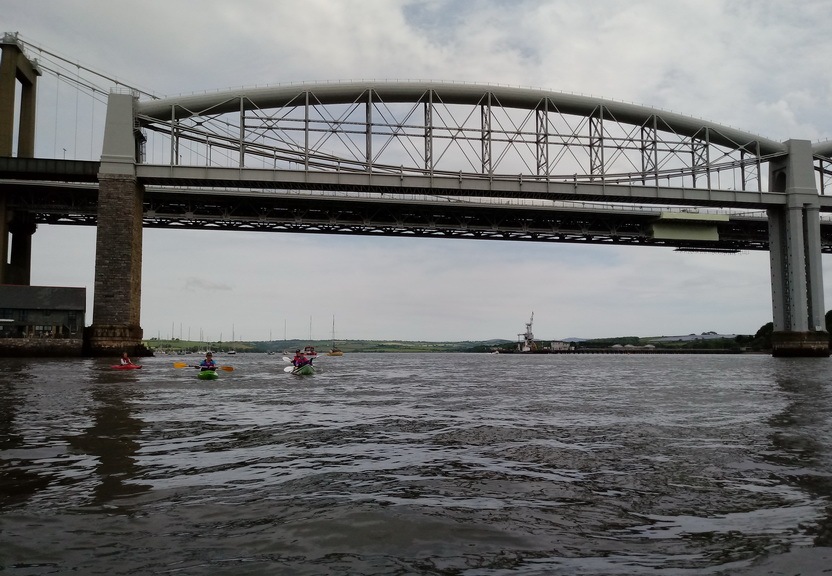 We left our exploration of the Tamar valley somewhat hanging in the air after our walk to Cotehele. We had found somewhere to launch our canoes. It was all a question of waiting for the right tide and a gap in diaries.

The aim of this expedition was to canoe the tidal Tamar to Cremyll Ferry and thus to complete our circum-navigation/walk around Cornwall. Unusually, we had invited friends to join us as part of our joint exploration of Cornwall’s rivers.

A very early start saw us leaving Cotehele at 9:00 at the top of a spring tide. The water was lapping the top of the quay and the gigs were returning from their morning exercise as we set off. The river was already ebbing making our progress satisfyingly easy.

We could not have chosen a better day. There was no wind and although rain was threatened for late afternoon, we expected to remain dry all the way.

The first stretch past Chapel Farm and round an enormous bend to Hole’s Hole  and on to Cargreen was a joy. Great reed beds lined the right hand side of the river; shelduck were teaching their offspring to swim; an occasional swan preened its feathers; the water was smooth and we made good progress.

Approaching Cargreen after 5 miles, we went through the first of two strange patches of water.  Despite the strong tide which was straining at the buoys and moored yachts, the water was glassy flat. There was not a ripple on it, as though someone had ironed it smooth. The clouds were perfectly reflected in its mirrored surface. Was this, perhaps, some junction between fresh and salty water?

A coffee stop at Cargreen was welcome, but short, as we did not want to miss out on the benefit of the fast-flowing tide.

Rounding West Point, the two great bridges came into view at the end of a long straight.

We passed the entrance to the River Tavy with its impressive railway bridge. It is a reminder of the free market at work in the Victorian age that neither this bridge, nor Brunel’s masterpiece allowed pedestrians or carts: the railway wanted to preserve its monopoly.

We met the second strange water feature just before we reached the bridges: a line of flotsam right across the river as though it had picked up a load from a single beach and was now transferring it out to sea. Not even our tame geographer could account for this. One only notices such features when close to the water surface.

Crossing this line, we noticed a change in the conditions. A line in the sky hinted that the rain might be moving in rather earlier than expected, a gentle headwind emerged from nowhere and we had to start working for progress, despite the strong tide.

By the time we reached the bridges, the wind was strengthening and funnelling through the gap. Waves were beginning to appear. So much so that the passage under the bridges was through fast-flowing maelstrom of water, pulling us this way and that.

This was the beginning of some very different conditions. ‘Wind against tide’, is a familiar statement in navigation theory lessons, hinting at discomfort and hard work. We experienced both.

The stretch from the bridges down the Hamoaze, past the naval dockyards, was ‘everyman for him/herself’ with rough water in patches, standing waves, and a strong headwind. Individual canoes disappeared into troughs and appeared over crests at random. Had anyone capsized they would have had to fend for themselves.

Though there was no over-riding pattern to the water, beneath us, the river was moving inexorably towards the sea. We were just grateful that there were no large ship movements as we battled on.

Eventually, we had all passed the Torpoint ferry, heading for the green of the Mount Edgcumbe peninsular, Maker church peeking above the trees.

We were swept onwards towards Cremyll Ferry and landed, thankfully, at bang on 12:30. We had completed the journey in 3.5 hours with a ten minute stop. A total distance of just over 11.5 miles.

Celebrations were delayed until we had found some dry clothes, warmed our frozen fingers and loaded our canoes. We can recommend the carvery in the Edgcumbe Arms after a hard morning on the water. It was well-deserved: at least we thought so.

Thus, we had completed our circum-navigation/walk around Cornwall without having to walk through Plymouth.

Our next project will be to cross its width of Cornwall yet again, and to circle Bodmin Moor, while continuing our exploration of the county’s churches. Oh, and our friends are already talking of exploring yet another river or two.

Thanks to Pom, Jeremy, Yvette, Gordon for joining us on this trip.