We picked up our journey where we left off, at a junction near Newbridge. A light rain – ‘heavy dew’ –  was falling as we stepped out.

It was early which is always a wonderful time to be walking. Ahead of us the mist was lifting from the valleys creating a magical, almost artistic effect.

Ahead, the roads were initially much the same as the previous day but as we dropped down to Bridgetown, the character changed. While we had been away the river had grown up a bit and had established its own mini flood plain.

The stretch through Crossgate, close to Druxton Bridge was a joy. The road followed the edge of the higher ground. It was instantly more prosperous. The simple open pastoral fields we had experienced further north gave way to arable fields and paddocks. The landscape was tidier too.

Near Werrington, the significant river Inney joined the Tamar, adding considerably to the volume of water in the river.

A short stretch on the A388 took us through a garden centre and onto a footpath for the first time in many miles. We were soon back on a road again, re-tracing some former steps towards Polson bridge.

By now we had joined the Tamar Valley Discovery Trail with its apple symbols. If you follow this then be warned: the apple symbols are often overgrown with ivy and it has a habit of deserting you at critical moments.

The St Leonard’s water treatment works was as delightful as ever while close by polite children were passing their Sunday mornings exercising their mounts walking around a dressage ring. Hidden away was the tiny packhorse bridge over the river Kensey which we had spotted before, now covered in a spectacular carpet of orange leaves.

We crossed over the A30, the usual dividing line between the ‘tougher’ landscape of north and ‘softer’ south Cornwall, and made our way to Lawhitton where we visited the unusual church.

We were back on very narrow lanes again, which we followed down a steep hill to Greystone bridge.

There were frantic warning signs about ‘uneven road surface’, ’10mph maximum’ and ‘danger of skidding’. No driver can keep to this sort of speed on empty roads. The road was so narrow that no driver could speed and any skidding would only damage the car as each side consisted of a Cornish bank. Perhaps there should be a sign at Polson bridge saying ‘Drivers use all roads in Cornwall at their own risk’. It would be cheaper.

At Greystone (the bridge dates from 1439) the Tamar enters a small gorge which stretches beyond Gunnislake.

What the books had not mentioned was the steep 1 mile 20% climb up the other side but it was cheering to see a drinking trough at the bottom of the hill and a cider barn at the top.

We sat to eat our picnic beside a kaleidoscope of apples waiting to be processed, their sweet smell reminding us of the abundant harvest.

From here, it was a short distance to Milton Abbot where, with the clouds looking distinctly threatening, we hastened down a non-existent path across some fields and up to the church where our car awaited us.

We had walked about 13 miles in five hours, leaving ourselves a ridiculously short distance to reach our target of Gunnislake where we will start the next stage of our odyssey. 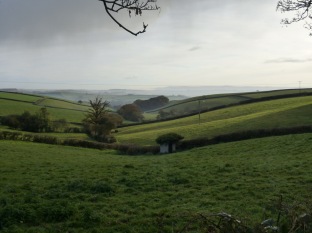 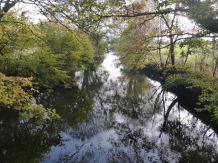 The sandcastle profile of of Launceston

The Tamar at Greystone bridge 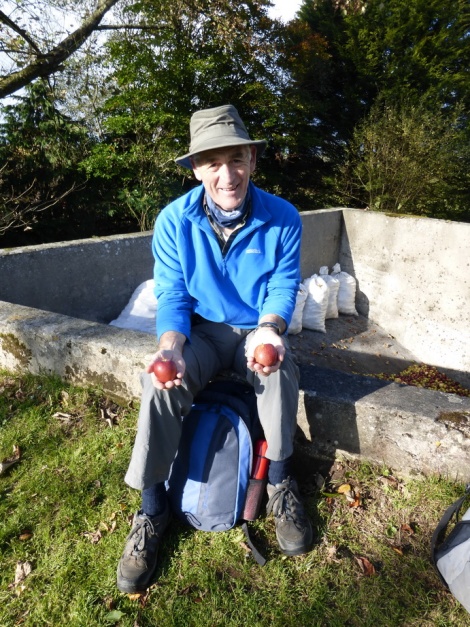