After a fabulous breakfast at a B&B in Bude (trying saying that out loud) we picked up where we had left off at Moreton Pound. Today would involve a long swing towards the sea to loop around the area around Bridgerule on the west bank of the river which should be Cornwall but is actually Devon. At Hackthorne near the wonderfully-named Budd’s Titson, the border is only about 3 miles from the sea.

This, coupled with the lack of north-south paths would drive us as far west as Marhamchurch. We had considered cutting off the bulge by walking the B3254 but one look at the road convinced us not to.

The blackberries were no worse than the day before and we made good progress along lanes to West Leigh where we were to turn left onto the so-called Planekeepers’ Path. Here we hit a snag in the form of deep puddle of slurry completely blocking the track. Some lateral thinking took us through the farmyard of Leigh Farm walking past a ‘Private’ sign unnoticed, and back onto the track across the valley to Cross Lanes.

Leaving Cross Lanes, we had a view of the wonderful panorama of the coast, stretching from Tintagel to the domes of GCHQ north of Bude as we crossed open fields.

Two churches beckoned us on: Week St Mary on a hill far ahead and Stratton about a mile away to our right. This was a reminder of how prosperous or densely populated this area was in the C15 for seeing two or three church towers  at the same time is a rarity further west. We were headed for Launcells Church which was marked as being 600 yards away but was invisible. Stratton kept beckoning.

Then, quite suddenly, we were summoned by bells: Launcells was in the dell in front of us.

Fearful that a service was about to start (it was a Sunday), we hastened on to arrive at the door of the church at 5 minutes to 11. Thankfully the service was not due until quarter past and we were able to enjoy this glorious church which Simon Jenkins includes as *** in his book of Thousand Best Churches in England. It was well worth the effort as the church is lovely.

Alongside the church is Launcells Barton, a fine C18-fronted house which would suit George Warleggan’s aspirations.

Had we had confidence, we would have followed the Planekeepers’ Path from Launcells up to Hobbacott Down but our map did not show a connecting footpath and we opted for a road route to Lower Cann Orchard. Here we found the other end of the path from Hobbacott and so, if you try the route, have courage and take the path.

Our route now lay along a single rolling road through Budd’s Titson to Whitstone. It was another quiet road with tall hedges on either side. Something called Hooper’s rule dates hedges by the number of woody species in a thirty-yard distance with one species per 110 years. Dr Hooper clearly never lived in verdant Cornwall. Here it must be half that for the hedges were a riot of blackthorn, sycamore, oak, as well as the ubiquitous brambles.

Cornwall was experiencing its characteristic ‘second Spring’ for the campion was out in places, alongside garden-escapes of michaelmas daisies.

Hilton Wood closed in on us near the end of our walk: a tangled mass of ancient-looking forest, the rampart of a settlement or iron age castle peeking through the trees. Sadly some ‘leisure lodges’ could also be seen. Agricultural diversification has its price.

All the streams we had seen so far had been flowing to our right, towards the sea, showing that we had not yet crossed the watershed into the Tamar valley which we probably left around West Leigh. The final steady climb of around 100m up to Whitstone convinced us that things were about to change.

Reaching the top, the views became better and better and there was a real feeling that we were climbing an escarpment. Sure enough, there ahead of us was the low valley of the Tamar while behind us stretched the coast from Tintagel to GCHQ. Our end-point had been well-chosen.

We had walked just over 9 miles in 3hrs 45 minutes and could have done more but Whitstone church awaited us. We had not seen the Tamar all day but we had walked around part of ‘Devon in Cornwall’ and crossed back into the Tamar valley. 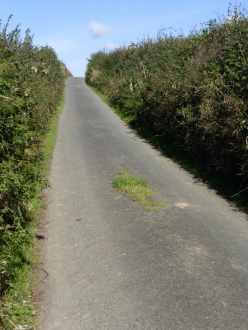 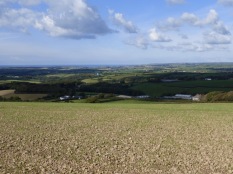 One thought on “Moreton Pound to Whitstone”