A bright October day took us back up to the furthest north of the duchy to start our serious attack on the Cornwall/Devon border and river Tamar walk. When we had reached the county border at Marsland Mouth on our coast path walk, we turned inland for a mile or so, ending in the nature reserve and wooded valley at Gooseham Mill. It was here that we started our walk, turning south for Plymouth.

The Marsland Water valley was lovely. On a narrow woodland path, we made our way along the Devon bank before crossing back into Cornwall and climbing up a hill towards Woolley where we joined a country lane. This led us across the busy A39 past a long barrow which is one of the few in Cornwall. This stands at a road junction, satisfyingly suggesting that one or more of the tracks must have an ancient origin.

From here it was a short step to the source of the Tamar on Woolley Moor.  This must be the least sign-posted river source we have yet found (although the real source of the Nile is just as bad). A scrubby enclosure at the top of Woolley Wood was impenetrable unless armed with waders and several large brush-cutters. According to the map this contains ‘spr’. We had to be satisfied with some standing water which was a little way from the site of the ‘spr’ but which we took to be the beginning of the stream.

Crossing into Devon, we followed a country road to a junction where another stream crossed our path. Trentworthy Water looked rather larger than the meagre stream we had seen at the source and we momentarily questioned whether the geographers had got the right answer on the Tamar.

A little way further on we were reassured for, as we crossed the Tamar at Youlstone Ham Bridge we could see that the river was now a respectable ‘small river’. We were back in Cornwall.

We were struck by the landscape of the area. We could not see or feel the sea: there was no soft salt-filled air to cool our cheeks. Around us was a landscape of low rolling hills dotted with green fields and small farmsteads. Fields contained cows or grass. The horizon was large with 360 degree views, dotted with wind turbines.

This felt very different from western, southern or coastal Cornwall. Walking was easy, though, with familiar country roads hedged with blackthorn, sycamore, holly and brambles. We did not want for sustenance for the blackberries were still around in abundance and we could snack as we walked along.

When I say ‘walking was easy’ this was only the general case. At one point our path deteriorated into one of those ancient paths so familiar from the wetter areas of Cornwall where you are not sure whether you are on a path or simply following the bed of a stream. Thankfully, the ground was moderately dry but the brambles and undergrowth more than made up for it. Machetes would have been helpful.

As we emerged from the covering of trees, we hoped for better but there was still a swampy patch to cross which would be distinctly unpleasant in wet weather, the rushes indicating that the water was not far below the surface.

We approached the Upper Tamar Lake at a distance before making our way down to the junction with the Lower Lake which is a nature reserve and reservoir for drinking water. Here we found a convenient bench for our picnic, watching grebes and a cormorant diving for their lunches.

Crossing into Devon at the dam, we followed the old Bude aqueduct for a delightful but sinuous walk  which reminded us of walking the levadas of Madeira except that the canal had long since ceased to flow and was being re-colonised by scrub. The ripples of the Tamar could be heard in the valley below us.

At Virworthy wharf we reached the head of navigation of the old canal. Here an exhibition in a small hut told the story of the C19 construction of the aqueduct. A series of short sections and inclined planes had allowed sand to be taken from Bude up into the hinterland to improve the drainage and acidity of the soils. It must have taken many, many loads to make much difference to a single field.

We had long given up trying to guess which direction in which we were walking when we found ourselves crossing a road near Puckland. We reluctantly left the canal/aqueduct and walked the short distance to Moreton Pound, crossing the Tamar back into Cornwall once again at Moreton Mill. By now she was a really respectable river and we itched to collect our canoes for the 100m length of decent water we could see.

We had walked 12 miles in just under five hours. It was strange to be back on roads and smooth paths without the ups and downs of coast path but it certainly made the going smoother.

Is the source here … 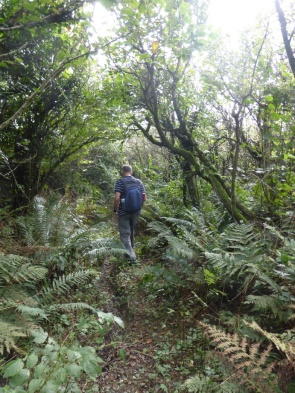 Deep in the undergrowth