A brilliantly hot and sunny July day tempted us out to walk to Brown Willy and Rough Tor. We used the excellent iWalk Cornwall advice.

They promised us 5.2 miles of moderate-strenuous walking ‘marshy even in summer’. The ground was bone dry but we could certainly see that  much of the ground could be marshy with frequent appearance of marsh grasses.

It was glorious. Starting from the end of Roughtor road by Charlotte Dymond’s memorial, one is literally tripping over ancient monuments the whole way up the slope to the top.

We headed for the main patch of reeds where some young horses were eating and drinking, and found the ‘holy well’. This was ‘discovered’ in 1970 and then lost again until 1994. One wonders how one loses a well and whether ‘discovered’ is similar to Speke’s ‘discovery’ of the source of the Nile: it was always there and known by local people.

For some reason the Wessex Division has decided to plant a memorial on top of Rough Tor. Our ancient ancestors would have understood the respect for the place but it seemed oddly incongruous and faintly invasive in such a landscape.

Our helpful notes did not mention that there was an excellent Piskie bath by the logan rock at the summit. This even has carefully crafted soap dishes.

Crossing to Showery Tor, we met a group of young lads who were doing their DoE Bronze Award, rather slowly, allowing time for the usual youthful banter. We encountered them again on top of Brown Willy where a cry went up ‘There’s a Pokemon up here’. ‘The government has spent £millions trying to get us to take exercise and all it needed was a fun app like this’, as one of them wisely remarked.

Another couple of walkers turned up thinking they were on Rough Tor, with no map or equipment, having arrived from Bolventor. Happy as anything, they set off for Rough Tor. It was just as well that it was not a ‘typical’ moorland day.

The views around us were magnificent, reaching as far as Hensbarrow, St Breock Down, Dartmoor and was that St Agnes Beacon we could espy?

From Brown Willy we re-crossed the bridge back to the foot of Rough Tor and made our way along the base of the tor towards the settlements, enjoying the remoteness of a small farmhouse with its own field system which must have been in occupation for many centuries.

There was no discernible path here and we could imagine it being pretty boggy in winter.

Fernacre stone circle was a short step away and we paid it a visit. We counted 50 stones either erect or hidden in the grass and walked the obligatory circuit without any ill or beneficial affects.

The way back around the tor was once again littered with meaningful stones which deserve more careful and detailed study: small hut circles, curb stones and alignments. They are probably all Bronze Age.

It had taken us three hours and we had covered 6.4 miles according to our tracker. It had been more moderate than strenuous but that was on a lovely hot day when the ground was rock hard. Boggy or in Winter would be a different matter. 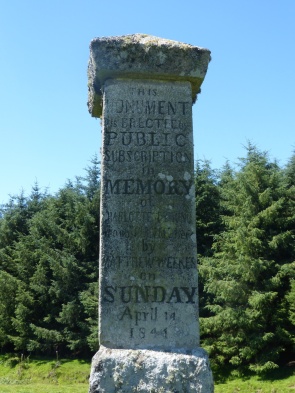