We had two more sections of the Cornish Coastal path to complete and spotted a gap in our diaries which coincided with a dry spell. So we headed northwards to the outer reaches of the county to pick up where we left off at Crackington Haven.

People spoke in hushed tones when we told them we still had this stretch to walk. The book called it ‘strenuous’.

The rise out of Crackington was long and steady. We soon found ourselves on some soft undulating downland which belied the dire warnings and only reached ‘moderate’ because of the occasional valley.

Passing Castle Point we could see St Gennys church tucked into a fold of the hill. Below us, the sea was relatively calm, turning over gently against the jagged rock formations that run out to sea. This is not an area of sandy beaches. The cliffs were a geologist’s delight with great folds and ridges demonstrating the earth’s power to torture rock into new shapes.

In the previous few weeks, spring had made a real effort and, in the lovely sunshine, we were the beneficiaries. Plants were bursting out all around us. There were great clumps of fragrant wild garlic, bluebells and primroses in the sheltered valleys while the cliff tops were covered in brightly coloured violets, willow and blackthorn blossom, gorse, thrift, and even campion.

We were brought up slightly short at Chipman Point where we found two worried walkers admitting they had ‘wimped out’ of descending some very sheer steps. ‘Lose your footing and you will be dead’ they said as we set off downwards. We had experienced worse but it was good to get to the bottom. If the wild horses could do it then so could we.

The path was not one for people with vertigo but that is true of much of the coastal path in this area. With the views and the vegetation, walking was a joy. 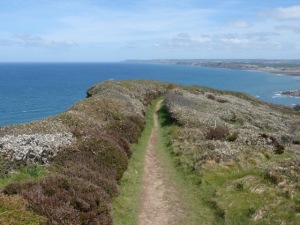 Bynorth mouth looked nasty on the map but turned out to be a lovely wooded valley with the path following the slope up the valley through a small and primrose copse, before taking us across the stream and back up to the heights the other side. This was an exception for the path makers generally seem to prefer a direct down and up route. Zig-zags must be infra dig.

After a restorative cup of coffee, we passed Millook which had a charm of its own, and rose once again to Penhair cliff with little problem.

We noted, with distaste one of those nasty planning decisions in a piece of building work going on in Great Wanson. A modern building was being constructed four-square in the valley, selfishly dominating the sea view.

Onwards to Widemouth bay which was a completely different prospect from the solitude we had experienced over the last hours. On a Sunday, the beach was covered with people: rugby tots, lifeguards, kite flyers, packs of dogs and simple walkers enjoying the sunshine.

We eventually settled on a prounciation of ‘Widmuth’ in contrast to ‘Bid-e-ford’ or ‘Wade-bridge’ – such Anglo Saxon names – but were unimpressed by the sprawling cheap architecture which clusters around the small patch of sand, the first that we had seen for some time. It is not surprising that we had crossed the boundary of the AONB as we entered the beach.

From here, and after some lunch, the going was very easy all the way into Bude, along rolling sandy cliffs. The book describes this as ‘easy’.

Bude is tucked behind a protective headland and appears as a sprawling mass on houses. We walked along the headland and admired the expanse of sandy beach exposed at low tide, overlooked by a C19 Storm Tower designed to like the temple of the four winds.

A short distance over the canal lock and past the sea pool took us to Crooklets beach and a welcome reward of an ice cream.

There was something vaguely familiar about Bude where we spent the night. Then we saw John Betjeman’s description of it as ‘an East Anglian resort facing the wrong way’. The houses were the same period; there was a game of cricket taking place; the golf course was in the middle of the town; there were bathing huts and polite ice cream shops and cafes; people were walking in the same aimless way, sheltering from the wind; and the houses were late Victorian/Edwardian with wide spaces between them. This was Cornwall’s Aldeburgh, developed at a time when the railways, now long gone in both cases, had brought tourists to the new seaside holiday spots.

The thing Aldeburgh had not experienced was the handiwork of a local builder in creating quite the most bizarre-looking Methodist church. 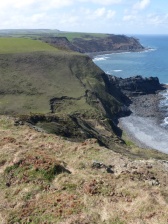 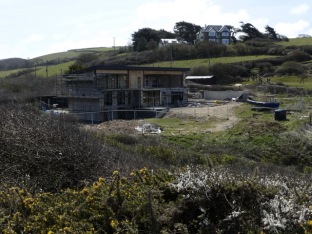 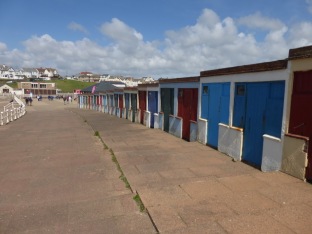