Another series of social engagements and guests prevented us from making the most of some lovely September weather but we managed to get out for two consecutive days to complete the south coast.

We had left off our story looking at a loo in Looe and this is where we re-started our journey. It was October and we were not expecting scalding heat, a suntan or azure blue seas.

We had not altogether  taken to West Looe which appeared to straggle with little character. East Looe had a heart clustered around some narrow streets worthy of Mevagissey or Mousehole.

Once we found our way out of town, we followed another straggly ribbon of houses along the cliff to Millendreath. This small beach was not an architectural gem having been colonised by a soulless holiday village of cheap houses.

A diversion – an unsafe cliff – took us through a narrow shelter belt of trees cunningly disguised to be woodland path and a short bit of road before we were once more on the cliff top, passing the monkey sanctuary.

The vegetation had changed since we had last walked. Now the dry brown leaves of oak, sycamore and beech were beneath our feet. The blackberries which had not been eaten by passing walkers, were coming to an end. The sloes were ripe on the bare wood of the blackthorn. Near houses, Michaelmas daisies were in full flower but the hydrangeas were coming to an end.

There was a distinct feeling that autumn was approaching. A weak sun shone all day: perfect conditions for walking.

The sweep of Whitsand Bay to Rame Head would be our companion all day. It was one of those walks where you can see your start and finish points throughout the day. The underlying rock was slate which had created black and grey beaches rather than the golden sand we expected.

Our next stop was Seaton where we took the opportunity to sit on a seat and have our late morning coffee. Like Millendreath, it was not going to win many prizes for architecture.

A long and glorious stretch took us to Portwrinkle. We had heard that it did not live up to its charming name but we found otherwise. The houses clustered around the tiny harbour seemed thoroughly traditional and well-cared for and good enough to excuse the straggle beyond. The hotel and golf course … well, there has to be a hotel somewhere.

Cresting a rise, we had our first view of distant Plymouth, a complete contrast to the rural landscape through which we were walking.

Before long we were being warned that we were entering a danger area. Approaching the Rame peninsular proper, one is constantly reminded how this area has been in the vanguard of defending Plymouth with a string of fortifications, batteries and forts from Palmerston’s time (1850s and 1860s) to World War II.

The first and largest of these on this walk would be Tregantle. The cliff edge below this has been converted into a series of firing ranges. Thankfully, we were able to walk in front of the fort for there was to be no firing today.

Only a few mysterious and very much C21 semi-camouflaged objects suggested that this was a military site. They were gone by the following day.

It was only a step from here to our car, parked free at Freathy despite Cornwall Council’s conviction that we might want to spend vast sums in their car park.

Here there was a complete contrast to the straggle of Looe: a series of sheds or shacks clung to the cliffside at the top of a steep cliff, with some gentle waves breaking on golden beach below.

There was something simple and appropriate about these shacks which were almost universally in wood or look-alike wood. They felt like holiday cottages should, where life could be lived inside and outside with gorse and bracken as the garden wall.

We had walked 11 miles in 4.5 hours and felt good. Described as ‘strenuous, moderate in places’ in the guide we had felt it nearer ‘moderate’.

We headed off to find some churches: Hessenford and St Martin by Looe. 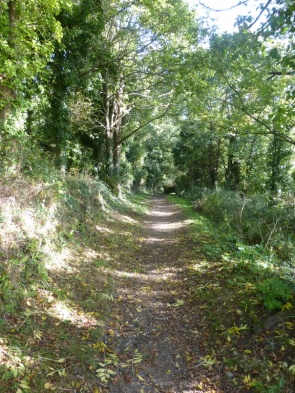 An old couple having coffee on a seat in Seaton

The first view of the distant city, set against Dartmoor

It is difficult to protect yourself against such things