Being a bright sunny June day, we set off from Sennen Cove, heading northwards towards Pendeen.

We had a gap to fill in, one to which we had been looking forward as we knew and loved the area.

Whitesand bay was glorious with surfers enjoying some good waves under the watchful eye of the lifeguards. Gwynver beach looked the better, and less populous, option.

The stretch from Tregiffian Vean cliff to Gribba Point was classic cliff path: an occasional scramble but mostly walking through low scrub. There was a strange zigzag at one point and then a small detour up the Cot valley for some reason but otherwise the going was easy and the route obvious.

Most of the Spring flowers were faded by now and the great carpets we had seen in recent weeks were gone. The foxgloves were in bold flower but little else was fresh. In places a red mat of dodder covered the top of the gorse. We quickly identified the flower of the day which we think is English stonecrop, a sparkly succulent, which covered many of the rocks. The general smell was of fresh bracken.

Below us, the sea was its usual turquoise but you would expect nothing less on a sunny Cornish day.

Emerging from the Cot valley, we skirted Ballowall (Carn Gloose) barrow without stopping, having visited it in the past. Although apparently terribly important archaeologically, this is surely one of the most confusing monuments for the amateur to disentangle. Our ancestors certainly picked a wonderful site for whatever it was they were trying to create.

A short distance further on was Cape Cornwall, so much better than Land’s End and reputedly better known by our ancestors. The little harbour, with its small tidal swimming pool looked calm and sheltered although it probably took the full force of the storms a couple of winters ago.

We had not come across the little medieval St Helen’s Oratory before. Perched on the saddle approaching Cape Cornwall, it has been rescued from its former use as a cowshed and turned back into something more evocative.

It is not hard to imagine that many such oratories once existed in Cornwall. Some must lie under our churches, others, like that at Madron or further up the coast beyond Zennor, have been almost recaptured by nature.

Porth Ledden lies on the north side of Cape Cornwall and is a natural harbour which has been described as ‘the best-defended early harbour in Cornwall’ with a cliff castle on both sides. We had visited this when we walked the Tinner’s Way a year or so ago. Today it was just as appealing even though the tide was out.

The landscape changes markedly from Cape Cornwall onwards. We were approaching St Just and there was evidence of past industrial activity and disused mines – with as many warning notices – everywhere.

Round the corner from Cape Cornwall was the Crowns Mine of Botallack. It is almost a law that you have to take far too many photographs of it and we did, eating our lunch looking down on its amazing engine houses.

Behind us, the ghostly sounds of the folk music of Brenda Wooton and John the Fish seemed to waft to us from the Count House where they used to sing. 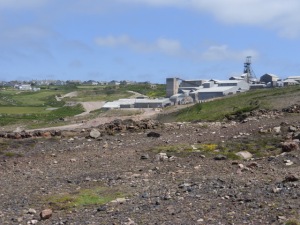 Passing the Levant mine (NT) we came all too quickly to the immense denuded landscape and buildings of Geevor mine. Mining and arsenic production has so damaged the surface that little will grow here.

We had one last treat however. We had parked in Lower Boscaswell on purpose and the path to our car passed what remains of Boscaswell fogou. This was almost completely destroyed by a farmer in the past but a short section still exists, hidden away behind some long grass in the a wonderful wide, above ground Iron Age wall.

The walk had taken us three and half hours. The book says we had covered about 8 miles, Google thinks it was about 7.5 miles.

On the way home we visited Pendeen, St Just in Penwith and Sennen churches.

Sennen and the Longships 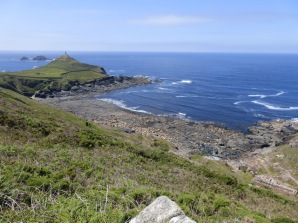 One thought on “Sennen Cove to Lower Boscaswell”