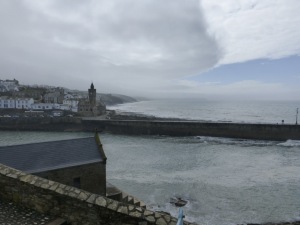 We were sure that we had walked this stretch of the coast path before but could not quite remember doing it together. So we set out on a day which was meant to be dry but turned out to be wet mist: what is known in Cornwall as claggy.

Leaving Porthleven, it was good to see the Institute at low tide and without the storm surf that appears to engulf it in a good blow. Less good was the large encampment on the fields leading down to the cliff path: a festival had been happening the night before and there was a large tented village. Occasional grunts could be heard emerging from under the canvas. 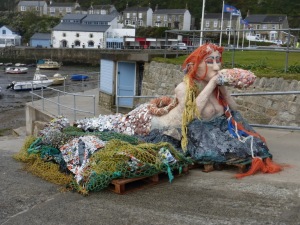 Mind you, the residents of Porthleven had obviously been enjoying a festival of their own for this lady was lying on the slipway. We have known Porthleven for years, from back when most of the buildings around the harbour were derelict. Now they are all in thriving use, crowned by the appearance of a Rick Stein cafe. The town is definitely on an up. 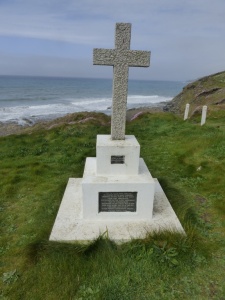 Just out of town, we passed a cross to all those sailors who had been lost on this coast (see earlier posting about Loe Bar). It was apparently not until 1808 that drowned sailors were guaranteed a burial in consecrated ground. It would be good to think that this was for political correctness – to ensure that Catholics, Muslims or heathens did not find themselves lying in good Protestant ground – but knowing those times, it would probably have been more about who paid the cost of the funeral.

The going was easy and we enjoyed the thrift and other plants which were in flower in profusion. There is no need to go to a wood to see a good display of bluebells for the cliff was covered in them. 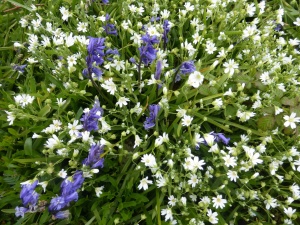 The cliffs here are steep but crumbling. Managed retreat seems to be the order of the day. The beaches below were covered in a multiplicity of differently coloured stone: greenstone, granite and even some unidentified white stone. 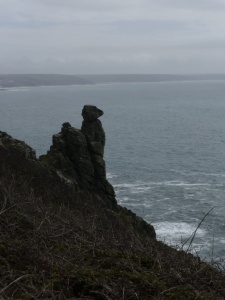 One wonderful feature is known as the Camel or Bishop. Somehow, we preferred to update it to the meerkat, its paws tucked firmly to its chest, on the look out for any passing ship in peril. 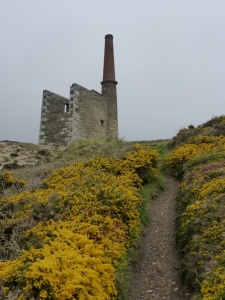 pproaching Trewavas Head, we delighted in the engines houses which rival the Crowns at Botallack for their precarious position on the cliff edge. Signs warned us that choughs were nesting here. It is good to know that they are no longer confined to an unspecified, and deeply secret, place on the Lizard, but are spreading to other parts of the Cornish coast. The black birds that we saw were, of course, simply black birds: not a red beak or foot to be seen. 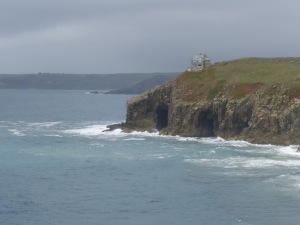 Moving on, after a little snack, we arrived at the familiar sight of Rinsey. This is surely the craziest siting of a house on this coast. Perhaps they thought that if they built any further back from the edge then someone would build in front of them and steal their view. On the other hand, we speculated, with caves below and in a mining area, perhaps the house has an elevator or staircase straight into the cave below to make smuggling easier. The plot for a re-working of ‘The House of Adventure’ started to develop in our minds …

We reached Praa – not one of Cornwall’s greatest architectural gems – with ease. We had walked a mere 6 miles in two hours and the weather was beginning to close in. We stopped off at Germoe, Breage and Sithney churches on the way home. 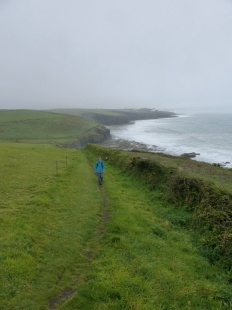 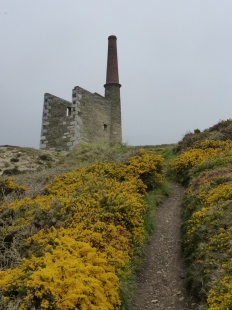