A sunny Sunday tempted us onto the South West Coast Path once again. As we are trying to link up a number of short walks, we had planned a stiff walk from the Lizard up to Dean, or Porthoustock, quarry.

The journey started by the exquisite St Wynwallow at Church Cove, surely the most southerly church in Cornwall, with its calm interior and serpentine lectern.

Leaving the cawing rooks, we headed onto the lovely cliff path which wound its way northwards.

It was a lovely time of year with the vegetation emerging in yellows, whites and blues. The blackthorn was in full blossom, the wild garlic a profusion of white; the gorse and primroses in yellow and the bluebells out. In places, the red campion was starting to appear.

The route was a delight: high cliffs and a calm sea hundreds of feet below. Once we had cleared the area of the Lizard we were fairly solitary and could walk along the cliff’s shoulder on a dry path.

Small cove after inaccessible small cove hinted at the opportunities for landing contraband late at night. It would be a steep climb with brandy for the parson on one’s back. Or had we been watching too much Poldark?

Our first sign of population was at Cadgwith, surely the most photogenic and famous fishing cove, tucked into a corner facing east: everyone’s idea of a Cornish fishing village from generations of calendars and chocolate boxes.

The reality of life is very different of course but on a sunny day it is hard not to enjoy the illusion of tranquility.

Shortly afterwards, we passed the tiny Poltesco cove, once the centre of the serpentine industry but now a calm ruin close to the beach. The National Trust has tidied the place up and add a charming bridge, bench and the obligatory explanatory panel.

A long trek on a south-facing cliff followed, relieved only by the existence of the large sandy beach of Kennack Sands where large Britons did what Britons do on a beach: sit on picnic chairs and wrap themselves up in rugs or behind windbreaks.

Close by was one of the less welcome eyesores of this part of the coast: a staggeringly unimaginative holiday camp. Seen from a distance it looks like a serried rank of simple ‘units’, each of which has its own balcony: to keep the occupants in or other guests out being unclear.

From the air, the true horror is revealed.

It was something of a relief when someone pointed out a basking shark out in the bay as it turned our attention from the land.

The stretch to Black Head was the most remote of the walk. We saw few people and enjoyed the proximity of the gorse-laden heathland that spreads northwards towards Goonhilly. A tiny valley garden was an unexpected bonus with camellias, azaleas and even clematis in flower, protected form the gales in a fold of the land.

Approaching Chynalls point we could see yet another large white ‘former hotel’ now converted to some other use, probably a care home. This promoted us to wonder at the way we put our old people in remote places with empty views of the sea when it might well be company and activity that they really desire.

Coverack is no Cadgwith and is something sub St Mawes in style but the houses were immaculate in the heart of the village and most managed to retain a genuine Cornish architectural style. The words ‘second homes’ and ‘holiday homes’ were on our lips.

Leaving Coverack, we headed onwards around the aptly named Lowland Point. Here, the landscape changed dramatically with the path no more than a few metres above the beach on a wide area of raised beach covered with large rounded boulders. This was not an attractive area of the path and we recalled the walk from the other direction, past quarries and destroyed landscape.

Just before the quarry, we found a familiar path and headed up around the excavations and back to our car. 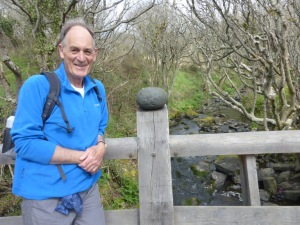